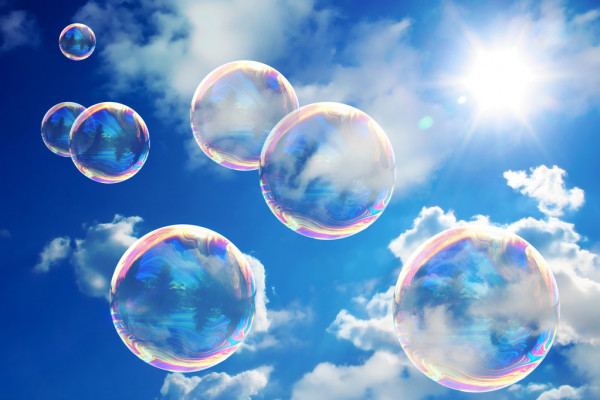 I will be delighted never to hear the word ‘bubble’ again. Its ubiquitous use in education will be forever associated with hordes of bemused children disappearing back home, or battle-weary parents faced with yet more shifting of plans. As for staff, I’m not sure they can face any more of the increasingly futile attempts to continue learning over video-link.

If mass vaccination is successful in quelling the virus, it will lead to one of the greatest pleasures of the next academic year. The eradication of bubbles, and the return to something like normal.

But this is not the real problem. For there is another type of bubble, and one that should be far more concerning to society. These bubbles were growing before the pandemic, and I would hazard a guess they have increased during it.

I refer to social bubbles whose mantra is the following. Only talk to people who are like you.

The most famous of these is the Westminster bubble, utterly divorced from reality. Advisors, spin doctors, politicians, civil servants and journalists banged up in an echo chamber. A few keep out of it, but only when they’ve made it to the top. I’m told by people in the bubble (yes, they do make it out occasionally) that there are far less cross-party friendships than ever before, made worse by the Zoomification of communication. That’s not good.

But there are bubbles everywhere. Parents are so obsessed with furnishing their child with the best consumer weaponry that they will try and ensure all social networks are with kids ‘like them’. If a child rebelled against his parents back in the 1980s, and sought out a social circle that was eclectic or subversive, they were considered alternative and indie. Now, if they don’t fit in, we decide they either have special needs or mental health problems.

My son has just finished his second year of university. Actually, a pale imitation of university; he seems to have been sitting in a student flat with a laptop, day after day after day, whilst adults tell him and his mates how reckless they are. In the event, he’s done quite a lot of socialising and met a fair few people. Now he’s not the greatest with words, but he did explain to me how good it was to be with people from different backgrounds, different cultures, different nationalities. His circle of friends includes people educated abroad, in private schools, in state schools both rural and inner-city.

This is why Tony Blair’s turn-of-the-century ambition for greater access to university is a good thing; it mitigates against bubbles and aids social mobility, without having the meritocratic baggage of grammar schools. Whether, in doing so, it has compromised academic standards is another question, but that’s for another blog

But aside from universities, what other mechanisms has society got to avoid these bubbles, or silos as they are also called? Precious few, I would say. Social media is the last place to seek solutions, where people retweet other people who are like them, whilst castigating dissenting voices. It’s a world full of ‘blocking’, something I’ve never quite understood. Imagine being at university, part of a large group sat around a table, when someone pipes up they are an anti-vaxxer, or a Trump supporter, or (heaven forbid) that they like Amarula? Do you stand up and announce to all that you request permission to block said outlier? Do you ask them to go on mute?

Social media is a catalyst for creating bubbles, a reflection of society at large.

There are other anti-bubble options, but these have also been affected by the pandemic. Travel, for example. I have been a leading advocate for this in schools, whether the British Council Connecting Classrooms programme, or the Erasmus and Comenius schemes. The first is now all online, and the second has been a cruel victim of Brexit. Such initiatives allow us to see things from the perspective of those who are fellow stewards of our planet, and they help us to work together to advance its future. Despite being very different, we have this in common.

And in order to really understand people from different countries and cultures, it is helpful to speak their language. But I’d be surprised if many schools have MFL as an integral part of their ‘catch-up’ curriculum. Instead, we more and more expect people to speak our language, feeding the narrative of British superiority favoured by this government.

Finally, what of the school system itself. I have stated that universities are very much part of the solution. But we need more diversity in schools too. Such is the climate at the moment, that diversity tends to be seen through the lens of race, gender or sexuality. But I argue that social diversity is at least as important. I really think it is.

If the quasi-privatisation of the education system continues, and we are all part of large academy chains, it is incumbent on each trustee and CEO to encourage as much social diversity within our schools. This could accompany a communitarian philosophy where each member is equally valued and cared for. Those with plenty will support those with little. Those with stability will support those in trauma. Trusts could join global alliances of schools, not for profit-making, but to provide students with meaningful connections across the globe, promoting listening and understanding. Languages can return as a core element of our curricula.

As we end this baffling year in schools, it may be that our work in bubbles is finally over, and our pupils can mix freely within their schools. Parents can return, and staff can focus on teaching rather than lateral flow testing.

But a bigger fight against societal bubbles is overdue. To expedite greater social diversity, and the consequent broadening of the mind and soul that this releases, it may take determined, ethical leadership and a shift in values.

We should be careful about forever blowing bubbles; instead, we should look to burst them.

One thought on “Bursting Bubbles”