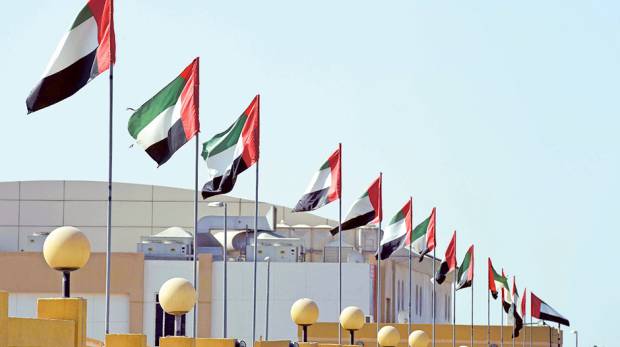 One of the many privileges of spending time in UAE schools is hearing the national anthem being blasted out by schoolchildren at 7.30am, just before the start of lessons each day. Emotive, communal singing is always a joy, whether as a participator or a listener.

As the children sing, the national flag is flown aloft, and the pupils stand upright in approval. It’s the same when I go to Sierra Leone, though there it has an element of aching pathos. When a country has been assaulted by so much misfortune, its anthem becomes melancholic rather than rousing.

It made me think. Why don’t we do this in the UK?  We seem to shy away from any nationalistic routines in our schools, considering them jingoistic, or unsympathetic to any group who may not be British. Our children only ever get to wave a Union Jack when the Queen reaches yet another of her remarkable milestones, usually with a cheapo ‘street party’ thrown in for good measure.

I suppose it doesn’t help that we have a dull national anthem. If I was to judge my nationality just on the quality of its anthem, I would not want to be British. I would have to be French, or Irish, or South African, or Italian. I love the Italian one particularly. At least we’re better than the Spanish; their dour effort doesn’t even have a single word to sing! My half-Spanish and half-English children have been given a right rum deal – they have inherited ‘extreme national anthem deprivation’.

But is the UK any less proud of its nationhood than countries such as the UAE and Sierra Leone? Absolutely not.

Quite apart from the reasons outlined above, plus the weather (there’s no way we could get 450 children singing in the playground during Storm Ophelia), I suspect that the main difference is our age. The UK is like a wise grandfather who has seen it all before, whereas these other countries are excitable teenagers, full of idealism and optimism. We just can’t be bothered, I suppose.

There’s one other possibility. We just need a new anthem.

Or else we pinch one.

Now that would sound good at assembly.